This week, all of you lucky readers are getting two doses of Domerberry. I published a post on Friday about adult coloring books because I'd been holding that anger in for a long time and something needed to be said, but I also bought Adele's new album on Friday.

Friends, this has been a good year for Domerberry Review-able albums. I've finally discovered Hamilton in the past couple of weeks and could easily write about that. (Sparknotes version of that review: Angelica Schuyler is me.) I listened to The Weeknd's Beauty Behind the Madness like I was getting paid for it for about two months after that came out, which I could rant about for several straight days. A week ago, my boyfriend, Justin Bieber, released a new album, and whenever I get around to listening to that, I could surely write a small book of sonnets in its honor.

Ultimately, though, there is only one album that matters in this Year of Our Lord 2015, and that is Adele's 25.

Our queen finally emerged from her four-year hibernation this weekend to drop 25, and with it, to slay all seven billion of her unworthy servants here on earth.

I have basically no general remarks to make on this album. I certainly don't have the kind of measured criticism I laid out for Tay Tay's 1989, because either A) this album is literally free of flaws, which is what I'm inclined to believe, or B) I am so entirely blinded by my glee over Adele's return that I am incapable of seeing problems in the album, in my fellow man, or, in fact, in anything at all.

With that entirely reasonable introduction, let us dive in to analysis of some key tracks. First, we have the album's opening track and ubiquitous first single:

Hello. I still have no idea what order the lyrics come in for the chorus of this song. Is she on the outside? Is she on the other side? I don't know. I don't care. Adele can be where she wants. I will continue to sing along with lyrics like, "Hello from the othoutside."

Send My Love (To Your New Lover). This is the upbeat Adele pop number slash vocal warmup I never knew I needed. Oddly, this is also the only song on the album that I really identify with. I expected to cry a lot over this album thinking of guys I've dated or, more realistically, had overwrought, futile crushes on, but none of the songs really called to mind any of my former beaux/obsessions. This one, though, I dig. Send my love to whatever chick you're with now and please be nice to her. Let's not be children.

Yeah, I'm as surprised as you are by this reaction. I have achieved self-actualization, and Adele has provided me with my new, self-actualized anthem.

When We Were Young. Okay, I like this song, but I have a conspiracy theory to put forth: there's literally no way that Adele is 27. That is what she and the Internet claim. Less than four years older than me. Ha. That's an utter lie; Adele is several millenia old and masquerading as a twenty-something. This song, which sounds from start to finish like something a seventy year old person would say, is a barely-concealed reference to her true age.

Remedy. Every time that the title word comes up, I think she is going to say "Enemy." This is probably proof that I am incapable of love.

River Lea. I eagerly await a Logansport-themed parody of this song entitled "River Eel." "There was something in the water, now that something's in me...it's meth."

All I Ask. This piano-driven power ballad is Adele's official application for acceptance in the Diva Hall of Fame. It is a good old fashioned belt-it-out banger. If Glee and Smash are still on television, they will cover this within the month. If they're not still on television, they'll return just to cover this song. If you listen closely, you can hear the great divas silently weeping in the background of this track over the fact that it wasn't written for them. That key change. That over-dramatic closing line, "What if I never love again?" At the Grammys next year, I want Adele, Celine Dion, Barbra Streisand, and a back-from-the-grave Whitney Houston to sing this together. And I want someone to record it so it can be performed via hologram at my funeral.

No, you can't stream this album, but $10.99 is a small price to pay for it. Go present your dues to your queen.


Posted by Sarah Cahalan at 9:49 AM No comments:

By this point, we are all well aware that I buy whole-heartedly into trendy stuff. I spent roughly 24 hours in London this summer and dedicated two of them in a cat cafe. I've been to a breakfast rave. My lunch yesterday consisted of leftover rattlesnake chorizo guacamole (seriously), which, yes, I repeatedly referred to as "guac."

Naturally, then, I decided a couple of weeks ago that I needed an adult coloring book.

I was sifting through job applications and realized I needed something to entertain me on my breaks other than mindless Netflix viewing and stuffing my face with Chips Ahoy. The image of the adult coloring book was seared into my brain since I'd, you know, been on the Internet in the past year, and it seemed that this was the perfect solution. It's creative (barely, but whatever, it requires art supplies at least), it's ostensibly good for brain and fine motor function, and most importantly, it's enormously, stupidly popular at the moment. Sold.

I went to Walmart—yes, Walmart; I may be a slave to trends but I also make $8 an hour—and picked up Calming Patterns: Portable Coloring for Creative Adults. This title confused me somewhat given that I can't think of a whole lot of coloring books that aren't portable, but I went with it and made my way to the craft supplies department. Visions of fresh colored pencils dancing in my head, I hit the wall of Crayola to find that all the colored pencils were sold out except the 24-pack of "Preferred by Teachers!" erasables. I wasn't about to make another trip to enable my coloring habit, so I embraced my full child status and bought them.

Long story short, I've now had the book and the pencils for about two weeks, and I've decided that this entire concept of adult coloring books as fun and stress-relieving is an absolute load of crap.

I won't pretend I don't enjoy breaking out my worthless, perpetually not-quite-sharp pencils and coloring my way through an episode of Orange Is The New Black Cupcake Wars. It's a nice change of pace from my normal leisure habits of colored pencil-free Cupcake Wars and sleeping. But STRESS RELIEVING? ON WHAT PLANET IS THIS STRESS RELIEVING? 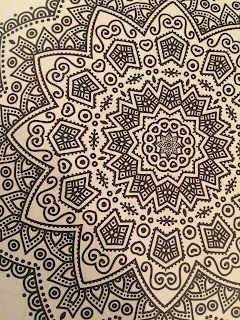 I guarantee that no one with enough disposable income to drop $20 on a literal child's toy and elementary school art supplies and enough time to voluntarily color for fun has a life so chaotic that the act of filling in every single one of those millimeter-wide spaces is LESS stressful than their normal routine.

Since buying this stupid contraption, I have finished exactly two full pages. Each one took me between two and three hours. This is not stress relief.

Sympathizers to this inane hobby will undoubtedly argue that I'm simply not doing it right. "The point of adult coloring books isn't to create a perfect image—it's to unwind while embracing your inner creative spirit" or some nonsense, right?

First of all, as someone who's both already fairly creative and is unrelentingly type A, the point of every creative endeavor is to create a perfect image, you cretin.

But secondly (and here's the important part), if you've adapted this habit to unwind without the pressure to be perfect, I have a newsflash for you: coloring books are literally your worst possible medium.

Coloring books were created with the express purpose of allowing kids to create picture-perfect images without the ability or brain cells to draw an anatomically correct Elsa from memory. The whole point is to stay inside the lines. Sure, you can always give Ariel purple hair when you know darn well her hair is red, you rebel, but ultimately, filling in the spaces of a coloring book is about the least creative "art" you can do. (With the possible exception of going with your friends to paint six identical sunsets at some wine and canvas place. Don't get me started.)

If you really want to de-stress by way of art, invest in some watercolors or something. And dear God, don't restrict yourself to the microscopic coloring spaces like the ones in my Walmart book. You know what's most assuredly not stress relieving? Carpal tunnel.

I'm going to keep using this coloring book, because while it does just increase my stress tenfold rather than reduce it, I'm the most high-strung person I know anyway, so it really fits right in to my aesthetic. But let's be honest with ourselves: if you want stress relief, save your $20 and put it towards a massage.


Posted by Sarah Cahalan at 7:32 PM No comments: