When I woke up this morning, I assumed that today would be a fairly normal day. I ate breakfast, I spent twenty minutes reading over the finer points of the Notre Dame Honor Code, I lamented my total lack of anything to wear, and headed to church. Normal.

It is when my family and I pulled into the parking lot at church that I first realized that today could be quite interesting indeed. Parked - or, more accurately, still trying with only marginal success to park - outside the parish hall door was a minibus full of residents of Woodbridge, a local nursing home.

Now, if you don't hear "bus full of elderly people" and think "adventure," then you have clearly never seen the handicapped section at All Saints Catholic Church. Admittedly, it has about doubled in size in the last year thanks to recent renovations, but this thing is small. Two perpendicular pews - each of which seats only four people when there aren't any wheelchairs involved - form the basic outline. The square of open wheelchair space between these pews and the aisles is MAYBE 8'x8'. A bus filled with mostly wheelchair-bound elderly people, then, is gonna make for an interesting morning in the handicapped section.

Luckily for me and for all of you now reading, my sister and I were seated in the handicapped section this morning, to accompany our grandmother. Since she had come from home, she beat the bus there by a fair margin and was blissfully unaware of the coming madness when we walked in to join her. 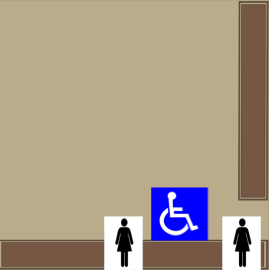 Shortly after we sat down, another woman (who has claimed the same spot in the wheelchair section since before it even was a section) entered the ring. Fine. 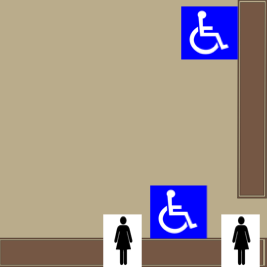 Still rockin' and rollin' was that in poor taste maybe

Then came the first of the bus folk. She settles into the space next to the not-my-grandma woman. Since I am sitting in the corner formed by the two perpendicular pews, this means that I am now trapped. But for the most part, we're still all relatively comfortable in the wheelchair section. 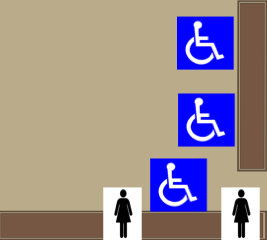 Then comes bus folk #2. He has his daughter with him, which is equal parts helpful and nightmarish, since she A) can maneuver him semi-easily if need be but B) sits directly behind his wheelchair at the end of the same pew as my sister and I, ensuring that I will never get out of this pew as long as I live. 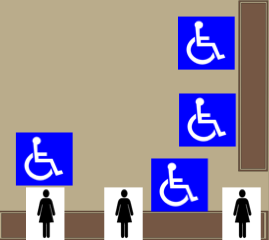 Then, finally, comes bus folk #3, which is, for those of you keeping track, wheelchair #5. By this time, the people wheeling in the bus folk have pretty much given up. It is possible that, with omnidirectional wheelchair wheels and no restrictions, one could fit three wheelchairs side by side along this pew. But with my sister and I sitting on either side of my grandmother's wheelchair and the space between grandma's wheelchair and BF2's wheelchair being only about 18 inches, there is no way BF3 is fitting in along the pew. The usher who wheeled her in leaves the poor woman in a single-wheelchair island in the middle of the section. 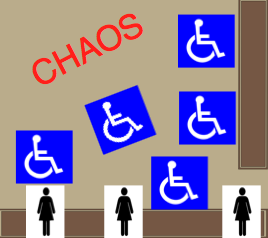 Now, I realize that this is not a fun way to sit. What this woman does not realize, however, is that it is the only place where she will fit. Unable to see what's behind her, BF3 tries not once but twice to back up. Each time, she smashes into a wheelchair.

BF4 has only a walker rather than a wheelchair, meaning she can sit in the regular front row. The regular front row, however, is obviously 2/3 full, because of course it is. Its occupants (who I later learn are relatives of BF2) reluctantly scoot over, opening a roughly 9-inch space for this woman. A Good Samaritan from a few rows back, who is himself 10 years younger than the bus folk at absolute most, runs up to help fold up the woman's walker and set it in front of the pew. In the middle of this, the bus parade ends with the entrance of BF5. Good Samaritan moves him into the pew & folds up his walker, which means there are now five people in wheelchairs and two walkers piled up roughly 15 feet from the priest. I look up at this point and notice that our distinguished young priest is definitely, 100% laughing.

Things in the front of the church thus established as completely out of control, mass continues. At about 10 minutes in, a baby screams so loudly and inhumanly that I literally laugh out loud. At 30, BF1 begins to sob. No one knows why, and no one acknowledges it, but she does have a purse full of Kleenex, so the collective decides to ignore it.

At communion, my sister and BF2's companion manage to escape & join the line. From my corner, I absolutely, positively cannot. I stay in my seat,  then, the only one standing in a sea of wheelchairs because of course at our church we stand for communion. Have you ever had an entire congregation turn and stare at you in unison? I have. 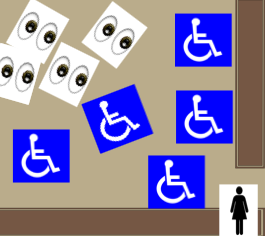 The end of communion comes and, just when I think we're safe, the little girl in the front row turns to enter her pew and breaks her flip-flop. Making matters worse or, depending who you're talking to, much, much better, the girl was also trying to enter the pew from the wrong side. So, upon realizing her error, she gimps her way clear back across the front of the church, past the walker graveyard, past her family, and into the pew, dragging her flip-flop all the way.

In summation, if you went to a mass at All Saints this weekend that was not this morning's 10 AM, you missed a lot of things.

Of course, the story doesn't end there, because when we reach home after church, our neighbor's three chickens are free ranging around our backyard. My dad and another neighbor force the chickens into the fence corner between our homes, thinking there must be a hole there they've been using to break into our yard. WRONG! As it turns out, our neighbor apparently owns the only three chickens on earth capable of sustained flight, because when cornered, they simply fly over the fence, into yet another yard where they do not live.

Today starts my last full week in America for quite some time, and from the looks of today, it's gonna be a good week.

Posted by Sarah Cahalan at 9:52 AM No comments: