All The Girls Have Different Noses

You may have assumed that, after three months of radio silence, you had heard the last of the ol' Domerberry.

I'm afraid, readers and friends, that you are not so lucky. The blog is still very much up and running; I'm just way lazier than we ever thought possible.

A lot has happened since I wrote my last post. For one, a third of the year has passed and we've moved from winter into spring. But also, I've found a job and moved across the country. I now live on the East Coast, which, if you're worth literally anything to me, you'll know is the inspiration for the title of this blog post. All the girls here do, in fact, have different noses, and, while we had a couple sneaky nice days over the past few weeks, the snow we got today on April 26 proves that Mr. Woods was also correct in his assessment that the East Coast is cold and dark—a climate perfectly suited to my cold, dark soul.

So far, it hasn't really been that noticeable that I've left middle America. Sure, I'll spot the occasional car with license plate number "GO SAWX," but not many people have accents that I can make fun of, and no one seems to hate me. (It could be argued that my perceptions of the East Coast are not totally fair.)

I'm keeping my eyes peeled for moose, but until that happens, I have mostly run-of-the-mill updates on life since my last blog post. Rather than a standard update, then, I will instead share with you Four Things I'm Obsessed With And One That I'm Ambivalent About: The Move Edition.

Thing I'm Obsessed With #1: My apartment. The process of securing the apartment where I now live was pretty much a total nightmare. I searched around the internet for weeks, I made many phone calls, I spent a lot of money coming out to New Hampshire for 24 hours to view a half dozen moderately terrifying properties, and, to make matters worse, I was deathly ill for almost the entire hunt. I also miscalculated the time of my return flight from New Hampshire on the aforementioned 24-hour trip and ended up on the Midway-South Bend bus in the middle of the night, where, along with my entire busload of fellow passengers, I was literally left behind by the transfer driver at a bus depot somewhere west of Michigan City.

With all of that hassle to find a place to live, I am not sorry when I brag that MY APARTMENT IS AMAZING.

I finally live alone (I'd say "no offense to my former roommates," but I know you're both glad to be rid of my persistent dish-washing laziness and constant singing), the place has more space than I could ever hope to fill, and it's close enough to my office that I almost never have to use my car—which is ideal both for me and for every other driver in the state of New Hampshire.

I've taken about sixty photos of the place to show off to family and friends, but I'll stick to just a couple here. This is less to save space on the page than to entice you all into coming to visit. You can sleep on my sweet pullout couch. 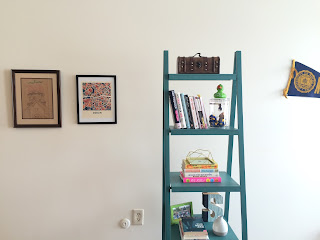 A fun game is "Who Can Guess My Age and Gender From My Bookshelf?". The Amy Poheler, Lena Dunham, and Mindy Kaling memoirs in a place of honor on the top shelf make it really hard to figure out.

Don't ask me what my throw pillow budget was for this apartment.

Thing I'm Obsessed With #2: HBO and Viceland. When I was setting up the internet for my new place, I got a little overwhelmed and impulse-bought a cable package. I initially regretted this, but these two channels are changing my life. Viceland plays nothing but documentary series about things like fashion in war-torn countries and food that rappers eat. I watch it almost constantly. It makes me feel unspeakably hip. I'm obsessed. I've not yet gotten as into HBO as one might guess—Girls, I'm coming for you soon—but it has enabled me to watch Magic Mike XXL twice already in the comfort of my home, so I'm pretty pleased with it. It also allowed me to witness the premiere of Beyonce's Lemonade, which I'm not even going to get into because I still haven't quite recovered from how much it rocked my brains out and also because I'm too busy perfecting my rendition of "Daddy Lessons" to keep typing.

Thing I'm Obsessed With #3: My job. I get to write about food and correct people's grammar for a living. I help make a magazine that they put right behind the checkout belt at Whole Foods. 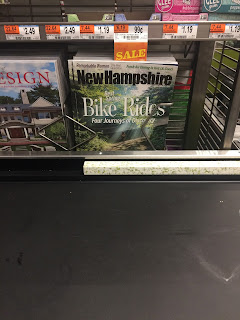 Note the grocery dividers covered in floral wrapping paper. My magazine goes to the bougie stores, y'all.

Thing I'm Obsessed With #4: The fact that I am 24 years old and able to honestly say that I love my job and my apartment. #blessed

Thing I'm Ambivalent About: Wine and painting. It has long been central to my personality to furiously hate all places designed for a bunch of white women to come in and kick back half a bottle of Chardonnay while painting identical sunset scenes. A couple weeks ago, though, I went to one. My co-workers were going. I felt like I needed to be social. So I went. 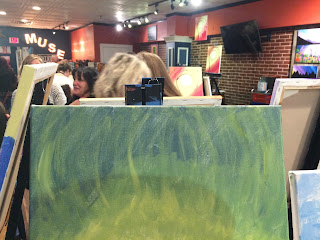 That red and yellow thing pictured in miserable triplicate in the upper middle there is what I was supposed to be doing.

I'm gonna be honest: I didn't hate it. This wasn't a regular wine and painting bar, though, it was a cool wine and painting bar. (Right, Regina?) The artists running the place had rainbow-colored hair and piercings and the place was just grungy and urban enough that I think your average wine mom would probably have been a little scared. They also gave me a bottle of cider to nurse instead of a paper cup of pinot grigio, so this aided in my non-hate.

Don't get me wrong: the idea of making matching paintings with a big group of friends still makes me want to punch someone. But luckily for all, I found a spot in the corner where no one bothered to pay attention to me, and I completely ignored the instructor and just painted my own thing like I would have at home for significantly less money. Was it a waste of $35 considering I had all the necessary supplies at home for free? Yes. Did I want to kill myself? No. So New Hampshire is full of surprises.

Stay tuned for what will hopefully be much more frequent blog posts now that I've settled in to the new digs. And keep your eye on flight deals to the damned frontier.

Posted by Sarah Cahalan at 5:06 PM No comments: