9 Reasons Why Justin Bieber Should Marry Me Instead

Hello, everyone. As usual, it's been a number of months since you last saw me here on the blog, but the magnitude of the news this week has compelled me to return.

What news story is she referring to?, you may wonder.

The Supreme Court pick? No. My only comment on that is that I wish it had been one of the Notre Dame grads on the shortlist so I could have finagled a work trip where I got to breathe the same air as RBG.

Those Thai kids in a cave? Also no. Elon Musk was involved, and when I hear the words "Elon Musk," I stop listening.

No, friends, the news I'm referring to is the biggest news of all: Justin Bieber's engagement. Suspending whatever good judgment he had left, the Biebs proposed this weekend to his girlfriend of roughly three minutes, Hailey Baldwin. Hailey is apparently a model, but mostly, she is a Baldwin. I wish them all the best and everything, but let's be honest — if Justin Bieber was going to get engaged, it shouldn't have been to Kendall Jenner's Friend. It shouldn't have been to Selena Gomez, either. It should have been to me. I have a longstanding relationship with the Biebster, and I firmly believe he should have chosen me over Generic Blonde Person. Here are my reasons why.

1. Justin and I have lived together for more than six years. Can Hailey say that? No she cannot. Talk to me when Justin's constant presence in the corner of your apartment has scared all of your family and friends, Alec's Niece.

2. I live in a relatively small town. Justin apparently likes hanging out in those, shopping at Target, eating fro-yo, dodging the paps. We could do all of those things in South Bend. It's fate.

3. My sole connection to Selena is that time I saw her from across the stadium at a Notre Dame game, when she mostly was an obstacle blocking my sight line to Taylor Swift. Not saying Hailz is necessarily more connected to Selena, but like, statistically, he's a whole lot less likely to run into her or her friends when hanging out with me.

4. I, too, have heard of Jesus. The only thing Justin is a Belieber in these days is Our Lord and Savior Jesus Christ. I spent several weeks in elementary school teaching my classmates how to say the Lord's Prayer in Ubbi Dubbi. We are meant to be. Hailey is apparently also a baby Christian of some sort (having recently begun attending Justin's nightclub church, Hillsong), but I've heard that same phrase used to describe Donald Trump, so clearly it doesn't mean much.

5. My hair is distressingly similar to Post Malone's. Posty is Justin's best friend; Justin clearly likes frizzy-haired brunettes; I am one of those. Next.

6. I really, really want Canadian citizenship, oh please God, Justin Trudeau, let me in away from this dumpster-fire-on-the-deck-of-the-Titanic of a country. I haven't figured out yet how this benefits the Biebs, but it is one of the leading ways in which the Biebs benefits me.

7. I'm a journalist! This may sound like an anti-reason, but what I mean is that I have a strong enough hold on journalistic ethics that I would never leak/sell our personal matters to tabloids. That said, I make no promises for the ethics of the dozen friends and random acquaintances I tell all of my secrets to.

8. You need someone older and wiser, telling you what to dooo-oo. This poor mess of a child clearly needs some gender-swapped "Sixteen Going on Seventeen" guidance in his life from a somewhat responsible older woman, and, as a 26-year-old who occasionally recycles, I can provide that. I will tolerate none of his DUI nonsense. And, unlike the supposedly helpful older party in the Sound of Music song, I actually hate the Nazis.

9. I have no particular desire to get married. Want to come to your senses and bail before the wedding day, Justin? Look no further than lil' old marriage-skeptical me. Truly a match made in Scooter Braun's dreams.

Watch out, Less Totalitarian Ivanka Lookalike. You just got Despacitowned.

A couple of years ago, Queen Adele I of Tottenham released an album called 25, ostensibly chronicling her 25th year of life. Adele and I, despite both being delightful plus-sized ladies with golden voices and dazzling senses of humor, have little in common. At 25, she had a baby; I had one four-inch-wide succulent, which I store in a small pot with googly eyes. She had sold 40 million albums; I had sold a ten-pack of thank you cards via my on-again off-again craft business once or twice.

But I recently finished my 25th year, and just as I reviewed Adele's 25, I figure I had better review my own.

March: I celebrated my birthday last year with a whirlwind trip to Dublin, which sounds hard to top because it is. But I also began my first day as a 25-year-old violently ill from a late-night batch of garlic cheese chips, so, like, it wasn't that auspicious a start to the year.

April: Fresh off the heels of having all of my wisdom teeth removed, I survived an April Fool's Day blizzard - foot of snow and all - all by my lonesome, and I bought my first bodysuit. I may not be wise anymore, but I am fashionable. A fair trade.

May: My sister graduated from college. She had a better GPA than I had in college, but I had a better seat at her graduation, so it evens out. Later that month, I had a Memorial Day reunion with an old friend, which involved good Indian food and even better Primark shopping. May was good.

June: June was even better. I received the coolest pair of jeans I've ever owned, hand-painted by my very talented artist cousin, and began wearing them everywhere so as to ceaselessly fish for compliments. I went to New York and got to watch my parents' choir perform at Carnegie Hall, see the best lady-created show in Broadway history (Waitress, duh), take my first SoulCycle class, and eat at Momofuku Nishi. And at the end of June, as you all know, I discovered my secret passion: ATVing. 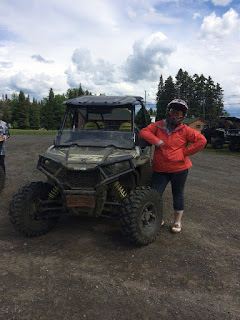 Eat my dust, or something

July: In the first 96 hours of July, I watched two friends get married, attended what was easily the best wedding reception in Morris Inn history, went to the Backer, and spent three full days solo-dining and street-art-peeping my way around Quebec City. At the end of July, BFF in tow, I climbed a mountain and paid my first and only visit to the best nightclub on earth, Whiskeys 20. I miss you, Whiskeys 20. I miss you so.

August: I watched my Irish wife marry the love of her life and took my Irish choir director to the Indiana State Fair. I glamped. I piloted an ATV and a stand-up paddleboard, and no one died either time. Successful month.

September: Listen guys, in September last year I went on a solo date to the Lady Gaga Joanne tour and then spent a week in Iceland. I could try and describe those two things, but whatever I'd say would not do them justice, so I'll just leave you with this never-before-seen selfie of me in a Gaga muscle tee. I'm sorry and you're welcome. 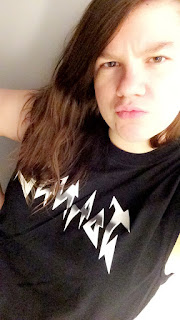 Behold, the headshot I will use if I ever need to apply to a lesbian biker gang

October: Moved across the country, by car, by myself. (Everyone who has ever met me should appreciate what a miracle it is that this went semi-successfully.) At the tail end of said move, arrived in South Bend just in time for USC weekend. Backered again. Another excellent month.

November: WENT TO PUERTO RICO! Yes, that's right, it's another shameless plug! You should donate! You should vacation there (and take me with you)! While you're at it, you should read my story!

Oh, and also in November, I won $250 on pull-tab lottery cards on Thanksgiving Eve at a Logansport bar, and I will never forget the look of rage and disbelief on my jock ex-classmates' faces as long as I live.

December: I'm sure other things happened in December, but look, I spent New Years Eve at a ping-pong nightclub, so I'm kind of on a one-track mind when it comes to this month. Here I am in a bathtub full of ping-pong balls. Normal night! 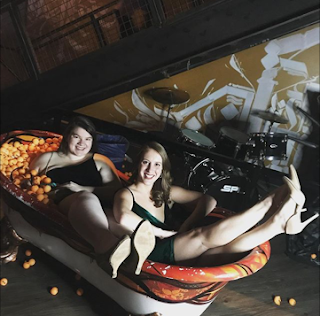 January: It never got warmer than roughly three degrees in January, so, like, let's just pretend this month never happened.

February: A few short weeks ago, I spent a long weekend in Denver and, going against type, didn't hate one second of it. There was wedding dress shopping with a group where no one is engaged. There was fancy Italian food. There was curling. It was heavenly. February also involved several dozen home-baked cookies, three rounds of speech meet judging, two hours of Roxane Gay lecture right here in the town where I live now, and one Galentine's Day party, all of which made it a wonderful lead-in to...

March. Spent a lot of time with a lot of cool people. Booked my first trip to South America. Smiled a lot. Turned 26.

Friends, it's been a good year. Here's to another one.