Well, friends, you knew it would happen.

Ever since that horrifying trailer hit the internet so many months ago, I have known that I would, at some point, be going to see the Cats movie. How could I possibly not? Movie musicals are my entire personality. I love abominations against mankind. Taylor Swift is in it! Yes, I knew I would go to see Cats, and a few days ago, it occurred to me that this would be the perfect opportunity to resurrect the Domerberry Movie Review.

I am pleased to inform you that I was very, very right.

Tonight, I took myself on a solo date to Logansport's one movie theater to see Cats. (Shoutout to the Price fam for witnessing this extremely normal night in the life of a mentally stable 27-year-old woman!) It was beyond my wildest dreams.

I'm going to return to that godforsaken trailer for a moment, because if you haven't watched it, I need you to go and do that now.

Did you do it? Excellent. Now, how many questions do you have?

The answer is likely "thousands." What size are these cats? Why do they have human hands? What poor animals are skinned to make the fur coats of fancy society cats?

I need you to know that none of these questions are answered in the film. I came into this movie with so, so many questions, and yet I emerged, somehow, with even more. I'll get to that in a minute, but for starters, I will make two small points of praise for this harrowing cinematic experience.

First, the dancing in it is great. Basically the entire cast except for the big-name leads are professional dancers, and a lot of that work was cool to watch. It reminded me that I should really go watch more professional dance. Second, Jason DeRulo, who played a cat that essentially was Jason DeRulo (right down to singing its own name repeatedly), was a delight. I have no notes for you, Jason DeRulo. Be in more musicals.

Unfortunately, my friends, that is where the delight ends!

I should begin with a quick overview of the premise of this film. Cats is a show about a group of cats who get together for a large party at which a wizened elderly cat will choose one of them to die. That's it! The chosen cat gets "reborn" into a "new life" in a magical land in the sky called the Heaviside Layer, and only one cat gets to go there each year, so naturally, all of the cats are clamoring for it. This raises some very interesting questions about what happens to every other cat in the Cats universe when they die, but whatever. What you need to know is that they throw a ball to figure out who gets to go to cat heaven, and they compete for that death-prize by singing songs about themselves. That is all that happens. Since the only plot element, therefore, is who gets chosen to go to the Heaviside Layer, I will leave that out and talk freely about everything else, since the "plot" is unspoilable save for that one thing.

Another thing you should know is that a lot of very famous people are in this movie. I don't know how. I don't know why. But Idris Elba, James Corden, Jennifer Hudson, Rebel Wilson, and Ian McKellen and Judi Dench (!!) all make an appearance in this thing, and it's all just too much to bear.

With all of that in mind, let's dive in to a few of the most distressing parts of the film.

Rebel Wilson, for instance. You may have noticed from the trailer that some of the cats in Cats wear human clothes and others waltz around naked. That's weird enough. But Rebel Wilson's character starts out looking like a regular, non-clothes-wearing, furry cat, and midway through her big number, she zips off her skin to reveal a second, rhinestone-studded skin WITH HUMAN CLOTHES WORN ON TOP OF IT! I cannot overstate how much I would not advise seeing this movie if you are prone to nightmares.

Making matters worse, Rebel's song is backed up with a giant chorus of singing cockroaches, each of whom also has a human face. Did I mention she's the first cat to sing her intro song? Because hoo boy does that set things off on the right foot for the rest of this monstrosity.

The next thing I suppose I should bring up is that these are ~sexy cats~. The internet has been talking about this ad nauseam. I will leave it to you whether you want to open that particular can of worms, but it bears at least mentioning that these cats are making eyes at each other for the duration of the film and it makes me uncomfortable. "What is this rated?" I thought to myself as the lead cat, dropped at the start from a previously high-society family life, immediately and vehemently attempts to seduce every slightly-sketchy street cat she sees. "Is this supposed to be a family film?" It's weird throughout the movie, but it's especially weird when Idris Elba (the criminal cat) finally sings his song. Idris's cat spends the entire movie slinking around the background looking mysterious in a large fur coat and hat, but when it comes time for his musical debut, he strips those and performs in the cat-nude. 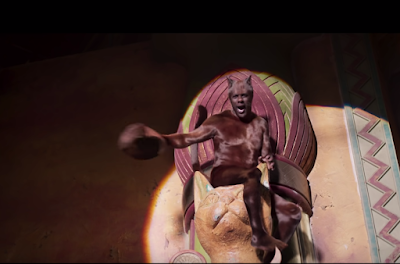 Thanks, I hate it!

It's also worth noting that, even if the cats weren't depraved and even if the cat-human-hybrid animation was well done (it isn't), there's something a bit scary on its face about that many cats wandering around.

Remember that time when I went on a fox hunt in Ireland and ended up literally surrounded by a sea of identical hounds? Every group scene in Cats was like that, but worse — because while those dogs' owners were around and they therefore could not hurt me, I'm not at all sure that those cats won't hurt me (psychologically) for years to come.

Next, I feel I must turn to poor Jennifer Hudson. J.Hud sings "Memory" in this movie — that one Cats song that you've heard of, and possibly sung in voice lessons. She did a lovely job. What a voice! Classic Jen.

You know how Anne Hathaway won an Oscar for taking that one song that teenage theater girls like from Les Mis and turning it into three minutes of rip-your-guts-out emotion-fest? J.Hud tried to do that with "Memory" too. But Les Mis is an emotional show. Cats is a 101-minute trip on the sparkly catnip drugs that Taylor Swift doses the other cats with near the end of the show. (YEP.) A random gut-wrenching belted high note in the middle of Cats will not an Oscar make. Someone give Jennifer Hudson another role, please. Any other.

There are many, many more things I could bring up about this movie, but I'll stick to the three remaining items that have stuck most firmly in my psyche.

First, a brief thought: The fact that Taylor Swift landed a role in what may be the biggest dance movie ever made is proof that 2019 is the year of the scam.

Second: This movie ends with the Judi Dench elderly cat staring straight into the audiences' souls and explaining to them how to speak to cats. Phoebe Waller-Bridge did not cancel the fourth wall for this!! If there's anything worse than the cats staring at each other suggestively, it's the cats staring at me in any capacity at all. Tom Hooper must be stopped.

Anyway, dear readers, there is one thing that has left me reeling from this film more than any other. I think humans, in the Cats universe, do not exist. The thing is set in London, yet businesses around the city are renamed with cat references. "The Grand Feral Hotel." "Milk Bar" — and not the Christina Tosi kind. There's evidence that humans existed at some point. Their trash is everywhere. But I get the distinct feeling that something sinister has happened to them. The buildings are all decaying. One entire scene takes place in a mansion that appears to have been abandoned Roanoke-style, table still set for dinner and drawers left half-open. They reference Queen Victoria constantly, yet the setting seems to be the 1920s.

Something terrible has happened to the human race in the world of this movie. Watch your housecats, people. It's coming for us next.